This is a collection of our quotes that we publish on instagram, only in a video format for easy enjoyment. 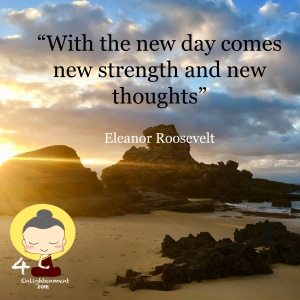 She was born into the prestigious family of Livingston but lost both her parents at a young age. She was educated in both America and London England where it is said the headmistress had an enormous impact on her life. She married Franklin D Roosevelt in 1905 and after her husband had an affaire she became more independent wanting a public life of her own.

Sometimes outspoken always headstrong she redefined the role as First Lady campaigning strongly for civil rights of African and Asian Americans and the World War II refugees. Following he husbands death she would spend the next 17 years in public service becoming the United States very first delegate of the United Nations. Regarded by many as one of the most esteemed women of the world 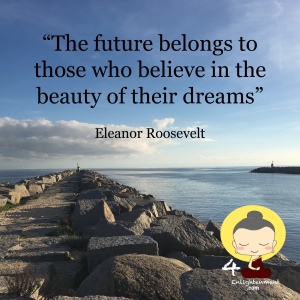 Indian born American spiritual author, public speaker and advocate of alternative medicine. A celebrated author in the self help category, Deepak studied medicine in India before moving to the United States in 1970. After completing further academic studies into internal medicine and endocrinology he became chief of staff at the New England memorial hospital.

It was hear that Deepak met Maharishi Mahesh Yogi, a meeting that would change his life. As he started with Transcendental meditation and resigned his position as chief of staff and established the Maharishi Ayurveda Health Centre. Deepak Chopra believes that we can change the very ageing process, sometimes even reversing that process.

His claims that his practices can treat chronic disease has had him regularly criticised by medical and scientific professionals alike. After Oprah Winfrey interviewed him about his books a loyal following grew making him one of the highest grossing self help authors of all time. In 1996 he co-founded the Chopra Centre for Wellbeing

Was a Buddhist monk of the Thai forest tradition, respected and well loved in his own country as a man of great wisdom, it wasn’t until the arrival of the hippies of the 1960’s that the west finally got to hear of this great spiritual master.

He was born into poverty in the northeast region of Thailand, his parents were rice farmers surviving from day to day. With no real education to be had in the region the young Ajahn would start his monastic training a the age of nine. He spent three years in the monastery where he learnt to read and write. He returned to work on the land of his parents but returned to monastic life at the age of 17. He was ordained at a local monastery where he stayed and practiced meditation until 1946 when he decided to become a wandering ascetic monk, a practice called dutong.

He wandered learning from teachers of the time, by far his biggest influence was Ajahn Mun a renowned enlightened meditation master. He spent this time of his life meditating in caves and forests until finally establishing a monastery near his home town where he taught his simple meditation techniques and started to gain a large following of disciples and lay people alike.

The arrival of the first western disciple, Ajahn Sumedho saw the development of a new monastery focused purely for the western mind filled with knowledge, the first of its kind in Thailand. A few years later Ajahn Chah was invited to give talks in England where he was to form the very first monastery in the Thai forest linage, called Chittaviveka. 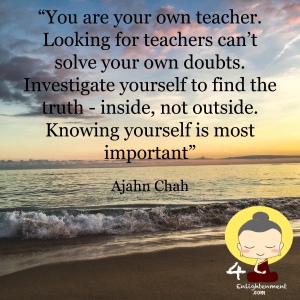 Ajahn Chah’s health was in decline by the early 1980’s and he was to suffer a massive stroke leaving him bedridden and unable to speak for ten years. Still in this condition he transmitted the teachings of the Buddha using his own body as evidence enough of impermanence and the importance of seeking refuge within ourselves.

To read more about this wonderful man, a full Meditation Masters article can be found by Clicking Hear

Gautama Buddha lived over 2562 years ago as a monk and teacher on which Buddhism has been founded. Born a prince of the Shakya clan in modern day northern India, now Nepal. He became dissatisfied with his life and that of the human condition he left the royal palace in search of truth. After many years practicing with the Meditation masters of the time, learning yoga and other breathing techniques, he still had not discovered the truth he was seeking, leaving these old masters behind he went in search of places of tranquility and seclusion to practice deep meditation. After spending many hours sitting in a one pointed Meditative state for prolonged periods of time Gautama discovered his middle way or the “noble eightfold path” as a way to enlightenment.

For the remaining 45 years of his life the Buddha taught this path, established the Sangha and 100’s of monastery’s through-out his travels through modern day India and Nepal and in so Doing leaving behind a legacy that has endured for over a millennium.

Every week we bring to you a short Moral story that has either inspired or motivated us in some way during our week.

Most of our stories have been loving handcrafted by ourselves into short moral stories that we hope inspire as well as teach a valuable moral lesson in life. A few of our stories are old classics and where the original author is know a credit is always given.

These are a collection of some of our previous Weekly Moral Stories, check back regularly for a new Moral Story every week 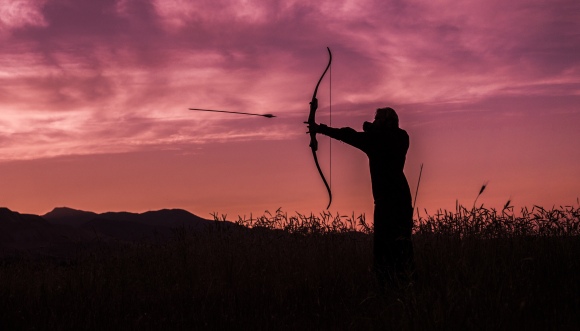 After winning several archery contests, the young and rather boastful champion challenged a Zen master who was renowned for his skill as an archer.

The young man demonstrated remarkable technical proficiency when he hit a distant bull’s eye on his first try, and then split that arrow with his second shot.

Undisturbed, the master did not draw his bow, but rather motioned for the young archer to follow him up the mountain.

Curious about the old fellow’s intentions, the champion followed him high into the mountain until they reached a deep chasm spanned by a rather flimsy and shaky log.

Calmly stepping out onto the middle of the unsteady and certainly perilous bridge, the old master picked a far away tree as a target, drew his bow, and fired a clean, direct hit.

“Now it is your turn,” he said as he gracefully stepped back onto the safe ground.

Staring with terror into the seemingly bottomless and beckoning abyss, the young man could not force himself to step out onto the log, no less shoot at a target.

“You have much skill with your bow,” the master said, sensing his challenger’s predicament, “but you have little skill with the mind that lets loose the shot.”

A young man caught a small bird, and held it behind his back. He then asked, “Master, is the bird I hold in my hands alive or dead.” The boy thought this was a grand opportunity to play a trick on the old man. If the master answered “dead”, it would be let loose into the air. If the master answered “alive”, he would simply wring its neck. The master spoke, “The answer is in your hands”. 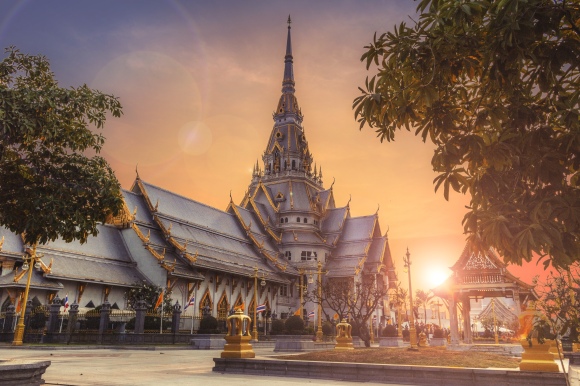 There once was a monastery that was very strict. Following a vow of silence, no one was allowed to speak at all. But there was one exception to this rule. Every ten years, the monks were permitted to speak just two words. After spending his first ten years at the monastery, one monk went to the head monk. “It has been ten years,” said the head monk.

“What are the two words you would like to speak?”

“I see,” replied the head monk.

Ten years later, the monk returned to the head monk’s office. “It has been ten more years,” said the head monk. “What are the twowords you would like to speak?”

“I see,” replied the head monk.

Yet another ten years passed and the monk once again met with the head monk who asked,

“What are your two words now, after these ten years?”

“Well, I can see why,” replied the head monk. “All you ever do is complain.”

Appearances can be deceiving

A Zen abbot went dressed in rags to the door of a rich man and was turned away with an empty bowl. So he returned in his formal robe of office and was invited in and served a sumptuous meal.

Removing his robe and folding it, he placed it on front of the feast and departed with the words, “This meal is not for me; it is for the robe.”

If you have enjoyed this wonderful selection of short motivational mini stories then please share with your friends and family as I’m sure they will get as much joy as you have. 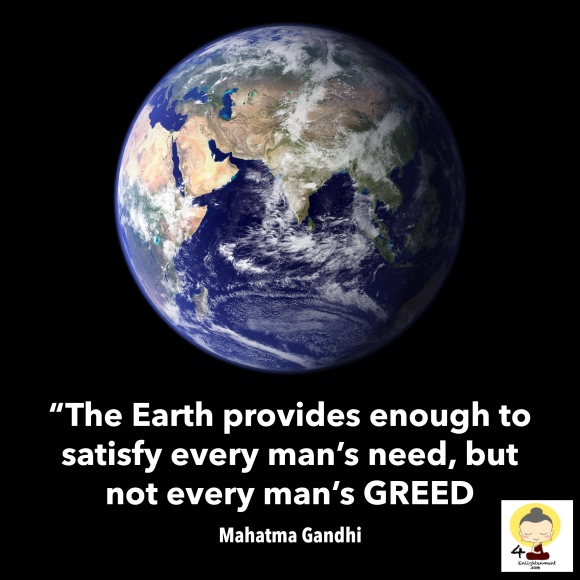 “The Earth provides enough to satisfy every mans need, but not every mans GREED” 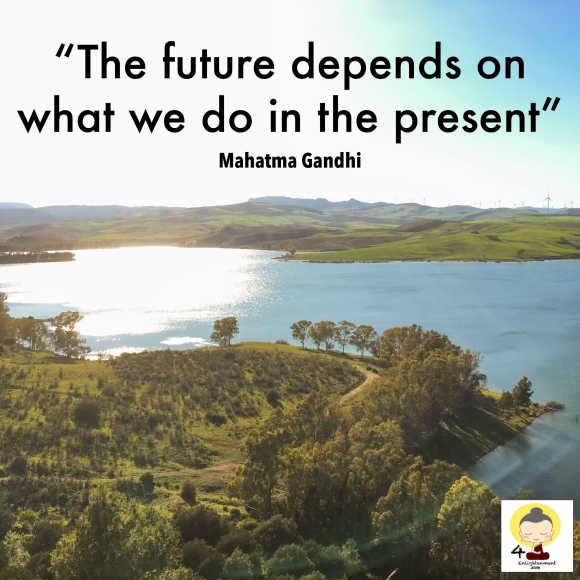 “The future depends on what we do in the present”

“There is more to life than increasing its speed”

“NOBODY can hurt me without my permission”

Leader of the Indian independence movement against the British rule of the time. Most memorable for his non violence approach, leading his fellow countrymen on a 400km march to the salt pans of Dandi in protest of the British imposed salt tax. Living modestly Gandhi wore the traditional Indian dhoti which he hand spun on his charkha.

He ate simple vegetarian food and undertook long fasts as a means of both self purification and political protest. October 2nd is Gandhi’s birthday and worldwide has become the international day of non violence, in India it is also a national holiday.